Smok vapes are always worth the money. Very happy with this mod 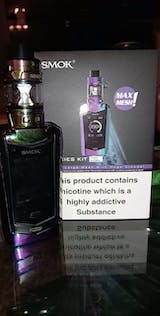 The product was found satisfactory and I am happy after purchasing it.

Good bit of kit, easy to use and runs nicely at 100w. Quick delivery, no dramas.

After years of vaping with a smok pen, I decided to go with the species mod. So much better for flavour and vapour, plus battery life is doubled.

A fantastic and powerful mod and best batteries I’ve ever purchased so I’m overthe moon as I get a better taste and throat hit so I need to get a nice taste for every drag so I’m well pleased, highly recommended A++

Smok seems to be dishing out the hits lately, but it's not that surprising as it's Smok but ever since I tried the mag kit, it seemed as though nothing could beat it, then the G-Priv series of mods and so on and so forth, each one out-vaping the last.

It's the same with this, the Smok Species 230W. Let's talk specs, the species I'm holding is the second variation of the "Species" family, and I'll be honest I can't remember using the first. Perhaps I missed it but this is here and now and as it stands, there's a 230W monster in my hands and i'll be damned if i'm not going to take full advantage!

Now, let's look at the tank and the one I have on top is none other than the TFV8 Baby V2 tank, obviously it's the one that comes inside the box but what's not so obvious is how good it is! We've seen the prince and baby prince tanks kick ass before but this is crisper, more flavourful and when it comes down to vapor production, put it this way - I got yelled at for vaping out the entire office!

On a serious note though, the whole kit is just insane. if I had something like this when I started vaping or just as the RDA, huge cloud phase started, I would have been the happiest vaper alive. With that being said, how does it compare to something I would use such as a mech mod and an RDA? it's better I think since there's no need to worry about ohms law, my power is regulated so I always get a consistent Voltage and above all, it's safer because if my ohms are too low, it will warn me and not fire and most importanly, if theres anything wrong with my coils or batteries, I have a whole armada of circuit protections to keep me from any harm.

I don't know about you but that's a huge plus in my book! What do you think about the new Species mod; Yey or Nay?