The Voopoo Drag 3 Vape Mod is the latest mod released by Voopoo, part of the already widely popular Drag series. The mod is not only beneficial for advanced users, but it is also simple to use, making it an ideal option also for less experienced vapers. Despite being powered by two 18650 batteries (Not Included) the Voopoo Drag 3 Vape Mod is not as big as it's predecessors, improving on the mod's grip on the users hands. Although the mod is smaller than the Drag mods before it, it does not compromise on power; fully capable of outputting from 1 to 177W, the Voopoo Drag 3 Vape Mod features a USB Type-C Charging Port, making it multi compatible with chargers utilised nowadays.

VooPoo is most known for its Gene chip which powers most of its hardware. The first brand to successfully embed the auto-draw feature into their hardware. Real trend-setters.

The Voopoo Drag 3 is probably the best mod I have had in 10 years of vaping. Simple to use, light and smaller than most mods with this power. It has a clear display and because there is no rubber on the casing it slips into your pocket easily. I have two negative comments. 1. The instructions that come with the mod are very poor. 2. I have not yet found a way of locking the Wattage setting without turning the whole thing off. Despite that I would definitely recommend this mod, especially at the price.

Fantastic machine, no bells and whistles and feels well in the hand but
1. You cannot lock the wattage and in my pocket twice it has cracked up to max wattage and I've burned 2 coils.
2. The paint has started coming off the corners. I like it worn for the cypher punk look but others will think it looks 'tatty' within 2 months of use 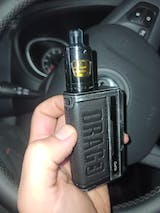 Just amazing not really anything to fault. Not as ergonomic and my Smok X mod but feels a lot more premium and looks amazing with my geekvape Zeus sub ohm tank. 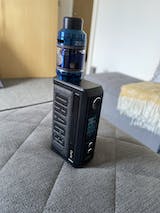 The VooPoo drag 3 mod is on of the best mods I've ever used, having been vaping for 10yrs now, I thought I've seen them all, but this device is something else, I would recommend it to anyone that likes simplicity and quality, period! 5🌟🌟🌟🌟🌟 from me.

the product quality price is very strong, the software manages the two batteries very well, the voopoo system, as always, is excellent at managing the whole process, excellent for making cloud in total safety.